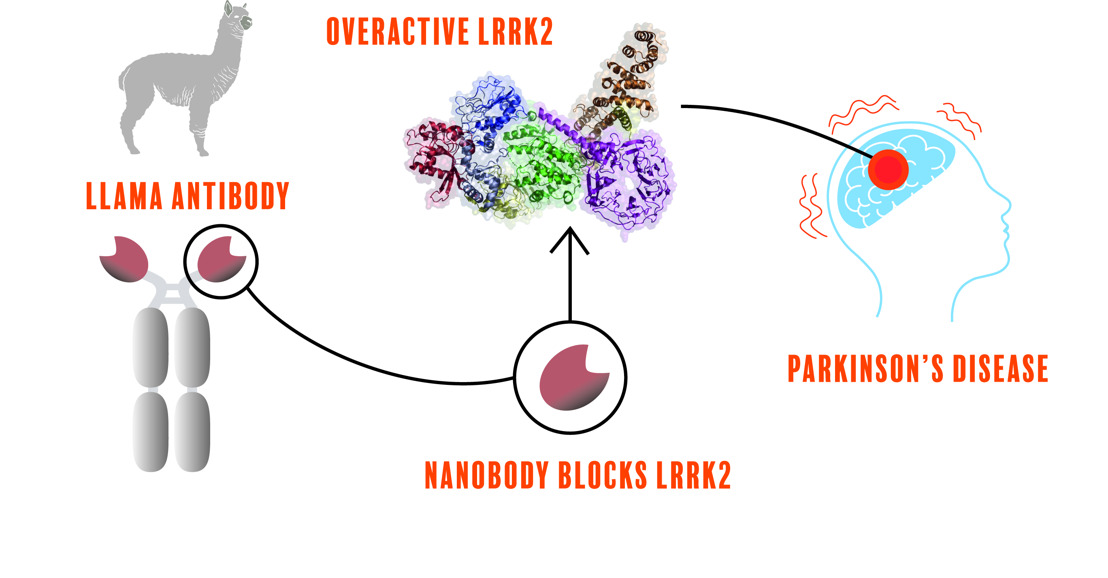 An international team of scientists, led by Prof. Wim Versées (VIB / Vrije Universiteit Brussel) and funded by the Michael J. Fox Foundation for Parkinson’s Research (MJFF), describes how llama-derived antibodies—also known as Nanobodies®—block the effects of gene mutations that causes Parkinson's disease. The approach holds great promise for the development of new therapeutics with minimal side effects. The results appear in the scientific journal PNAS.

Parkinson’s disease is the second most common neurodegenerative disorder, affecting more than 10 million people worldwide. This number is likely to increase as the population ages, and unfortunately there is no cure to date. Initial symptoms like tremor and movement problems gradually get worse, resulting in stiffness, slowness, balance problems and in later stages also dementia.

The exact causes of Parkinson’s disease are unknown and are likely a mix of genetics and environmental factors. For some forms of Parkinson's, however, scientists have identified disease-causing gene mutations. One of the most important genes linked to Parkinson's codes for the protein LRRK2. When this LRRK2 protein becomes overly active in brain cells, caused for example by a gene mutation, this can lead to Parkinson's disease.

"LRRK2 is one of the most promising targets for drug development,” says prof. Wim Versées (VIB-VUB Center for Structural Biology). His team studies the structural biology of proteins to be able to understand and hopefully also intervene in their mechanism of action. Versées teamed up with researchers in Germany, The Netherlands and the US to explore a completely novel approach to inhibit the activity of LRRK2.

"What we would need is a way to block LRRK2 in a very specific and completely new manner," explains Dr. Ranjan Kumar Singh, who works in the Versées team. “We wondered whether Nanobodies®—small antibody fragments derived from llamas—could give us a way to do exactly that. They did."

The team tested the llama-derived Nanobodies® that bind to LRRK2 in test tubes containing the protein. So far so good: the Nanobodies® found the LRRK2 protein, bound to it and blocked its activity. Next, the researchers moved on to human cell cultures that produce high amounts of mutant LRRK2, similar to what happens in Parkinson's patients. Here too, the Nanobodies® were able to block the activity of the protein.

"Of course, we still need more research to develop actual therapies for patients based on our Nanobodies®, but these are encouraging findings,” says Versées, who is particularly excited by the diverse modalities and mechanisms by which the generated Nanobodies® block LRRK2.

“The different Nanobodies offer a lot of potential ways to tweak LRRK2 activity, which is not only promising for the development of therapeutics, but also offers opportunities for diagnostics and as research tools. They also work via a completely different mechanism than the other LRRK2 inhibitors currently explored in trials, which means they might result in fewer side effects.”

Funding the search for a cure

Apart from the Research Foundation Flanders (FWO) and the VUB, the research was also funded from the early start by MJFF, the largest global non-profit funder of Parkinson's disease research. "We were very excited about the team's nanobody-based approach to target LRRK2,” says Andrew Koemeter-Cox, Senior Associate Director at MJFF. “These nanobodies are valuable tools to further study LRRK2, and show the potential for development into therapies.”

Versées already secured a proof-of-concept grant at VIB and has other funding applications pending to be able to continue this research line and develop drug modalities based on the current results. ​

This work emerged from laboratory experiments and has no immediate implications for treating patients today. It takes years to develop these scientific breakthroughs into a new therapy or diagnostic. If you have any questions about this, please send us an email to [email protected]