A team of scientists has described a new dinosaur species that could both walk and swim. “We always thought dinosaurs were terrestrial, but now it is very clear for the first time that there were also swimming dinosaurs”, says palaeontologist Pascal Godefroit of the Royal Belgian Institute of Natural Sciences. Halszkaraptor escuilliei had modified forelimbs that likely allowed him to manoeuvre in water like a penguin. With its swan-like neck and long ‘fish-eater-teeth’, it could pick prey out of the water. The predator, almost 80 centimetres long from head to tail, is closely related to the iconic Velociraptor. The new aquatic raptor species is described in Nature.

The exceptionally well-preserved fossil is 71 to 75 million years old (Late Cretaceous). It was found at Ukhaa Tolgod in southern Mongolia, a locality known by palaeontologists for decades and often targeted by poachers. Godefroit notes, “The fossil was exported illegally outside Mongolia and circulated in private collections around the world for more than ten years. In 2015, a French collector got hold of it. He informed me and I immediately realized it was an extraordinary specimen. He donated it to the Royal Belgian Institute of Natural Sciences, to study it and prepare it for return to Mongolia. Unlawful fossil trade is a great challenge for modern palaeontology and a big loss for the scientific heritage of Mongolia.”

Because the fossil was traded illegally and showed an unseen mix of characteristics, palaeontologists wanted to be sure it was not forged. The synchrotron scanner in the ESRF (Grenoble), which is 1000 times more precise than a medical X-ray scanner, showed it was an authentic fossil. The scanner also helped visualizing the parts of the skeleton still embedded in rock.

The analysis shows that “Halszka”, named after the Polish palaeontologist Halszka Osmólska, has a few traits in common with aquatic predators: more teeth, long tube-like front teeth typical for fish eaters and a neurovascular mesh inside its snout that resembles those of modern crocodiles. Halszkaraptor’s hands, with an elongated third finger, probably had flippers, with which it manoeuvred in water like a penguin, using its long neck to grab prey in a surprise attack. Based on the hip structures, the palaeontologists think it walked upright like a duck.

“Halszkaraptor is a great find”, says Koen Stein (Free University Brussels, VUB), one of the co-authors. “It lived like a water bird, on land as well as in water. Palaeontologists never expected dinosaurs to have explored this biotope. The discovery shows how diverse dinosaurs were and how much there is still left to discover, even in long-studied regions like Mongolia.”

Halszkaraptor belongs to the theropods, a suborder of biped carnivorous dinosaurs, of which T. rex and Velociraptor are the most famous. Theropods became the dominant predators on all continents over a period of 160 million years. Some theropod species, like Spinosaurus, reportedly had fish in their diet, but indications for aquatic locomotion remain controversial.

Within the theropod group, Halszkaraptor fits in the Maniraptora - a group that includes birds and their closest relatives. During the Cretaceous, many of those Maniraptora lineages developed different characteristics, influenced by their respective ecosystems. Some developed flight, others grew to gigantic sizes, became fast runners or adopted a herbivorous diet. Because Halszkaraptor escuilliei has some traits that we do not find in others, the palaeontologists have created a new group for this new species: Halszkaraptorinae. 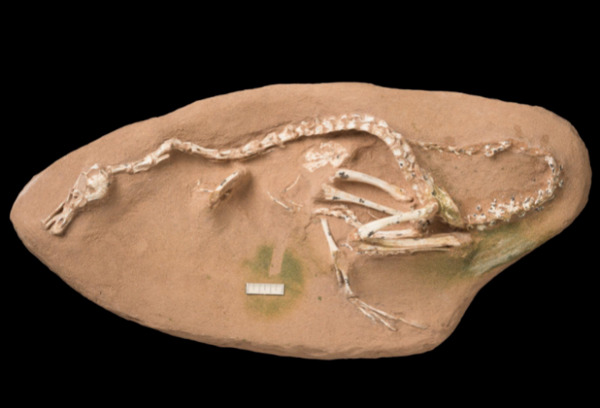