The programme for Difference Day – with debates, lectures, workshops, an exhibition and award presentations – can be found at www.differenceday.com.

Who controls the truth?

Press freedom around the world is decreasing. In ever more countries, there’s a climate of hate towards the news media and it’s becoming increasingly dangerous for journalists to do their job. That’s the conclusion of the 2019 World Press Freedom Index, published this month by Reporters Without Borders. Furthermore, misinformation, often in the form of ‘fake news’, continues to grow. How do we know what the truth is, and how can journalists and a high-quality press play their role?

On 3 May, the United Nations puts the importance of a worldwide free press in the spotlight. VUB and ULB are doing their bit by organising the fifth Difference Day with a number of partners. The central theme is ‘who controls the truth?’ The universities will jointly hand out two honorary doctorates to journalists who risk their lives to report the truth about conflict and political power.

Rudi Vranckx is one of Belgium’s best-known journalists, thanks in no small part to his unique reporting of international conflicts. What makes him remarkable is the way in which he always tries to focus on the human aspect of war.

Vranckx isn’t interested in spectacular images, but in understanding what drives people to war. Like no one else, he understands the dangers linked to populism and propaganda in an armed conflict. In each conflict he reports on, he must get to grips with the eternal struggle between truth and lies. In every war, news sources become coloured and it’s down to the journalist to remain sufficiently critical.

Elena Milashina is a Russian investigative journalist for the independent Russian newspaper Novaja Gazeta. She’s known for her extensive investigations and critical articles about human rights violations and government corruption. Among her work are investigations into the persecution of the LGBTI community in Chechnya and other parts of the North Caucasus.

Following the assassination of her colleague Anna Politkovskaya in 2006, Milashina continued her work by reporting on forced disappearances, arbitrary arrests, extrajudicial executions, torture and the persecution of relatives of alleged insurgents.

In October 2009, she won the Human Rights Watch Alison Des Forges Award for extraordinary activism, and in 2013 she received the US State Department’s International Women of Courage Award.

Honorary title for freedom of expression for Marcela Turati

On the evening of Thursday, 2 May, VUB and ULB will present their honorary title for freedom of expression to Marcela Turati, a Mexican freelance investigative journalist who specializes in covering the victims of the Mexican drug war. A 2017 Harvard University Nieman fellow, she is co-founder of the citizen journalism network ‘Periodistas de a Pie’ which is committed to creating security networks for journalists and defend freedom of the Press. She is also a founding member of ‘Quinto Elemento Lab’, a lab dedicated to help investigative journalists with their research. She has been a frequent contributor to the Mexican magazine Proceso.

She is the author of Fuego cruzado: las víctimas atrapadas en la guerra del narco (Crossfire: the victims trapped in the drug war) and is the coordinator of many collective journalistic projects in Mexico such as ‘Másde72’ (Morethan72) about massacres of migrants, or ‘A dónde van los desaparecidos’, about the disappearence of thousands of people in Mexico.

In 2014 she won the FNPI award of excellence and in 2013 the Louis M. Lyons award for ‘Conscience and Integrity in Journalism’.

Following London and other world cities, Brussels now has its own Speakers’ Corner for one day. Students from VUB, ULB, Erasmus Hogeschool Brussel and IHECS who are concerned about the future of our society will have the chance to address the public on this spot. The organisers’ aim is to allow people to openly express their views. There are few places where people can go to be heard.

Thursday 2 May, 20.00, Gala Dinner, Bozar
Presentation of the Difference Day Honorary Title for Freedom of Expression to Marcela Turati.
See the programme here - Invitation only

Do you need more information? Do you wish to interview one of the speakers, artists or laureates? 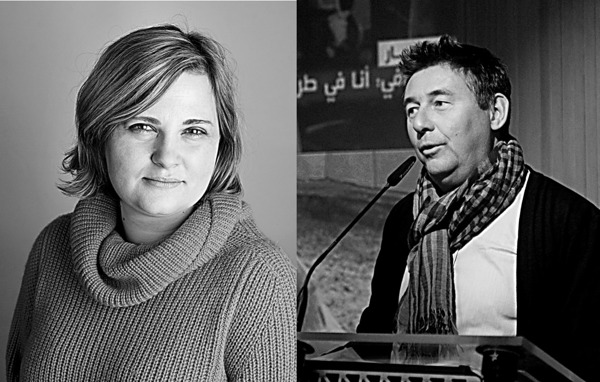