What’s notable is that the vast majority of new Psychology students are women: 493, compared to 114 men. In Communication Sciences, 124 female students have enrolled compared to 65 male. In Social Sciences the figures are 183 women and 143 men, while Applied Economy is the main exception: 263 men and 129 women.

At the time of writing, there are 15,939 students enrolled for the coming academic year. Last year the figure was 15,185, meaning growth of 5%. Of those enrolled, 7,327 are male, compared to 8,610 female. VUB is growing not only in first-generation students but also in those coming to study in Brussels after doing their bachelor degree elsewhere. The master in Journalism at the faculty of Literature and Philosophy, for example, has grown by 12.5%.

Success in the science faculties

What’s also striking is that the faculty of Science and Bio-engineering has grown by 6% among first-generation students and no less than 11.1% among all students. As a result it now counts 1,789 students. Another grower is Urban Studies, which has doubled to 71 students. The master in Marine and Lacustrine Science and Management, given with UGent, grew by 50% to a total of 63 students. Computer science has also been a success with no less than 18% growth, to 144 students. And the faculty of Engineering Sciences has seen a growth of 4%. The master in Electrical Engineering saw huge growth of 127% to 41 students, while the master in Industrial Sciences Electromechanics is also popular, growing by 41% to 62 students. In the faculty of Medicine and Pharmacy, the bachelor has grown by 80%  and the three-year master in Medicine has seen an increase of 58.5% to 225 students.

The Vrije Universiteit Brussel finds itself at the heart of the internationally orientated capital, Brussels. To give more VUB students the chance to spend time studying abroad, VUB is offering overseas allowances. A student that was entitled to a Flemish study grant las year will receive €170 a month if they go abroad without a grant, or €70 a month if they have a grant. 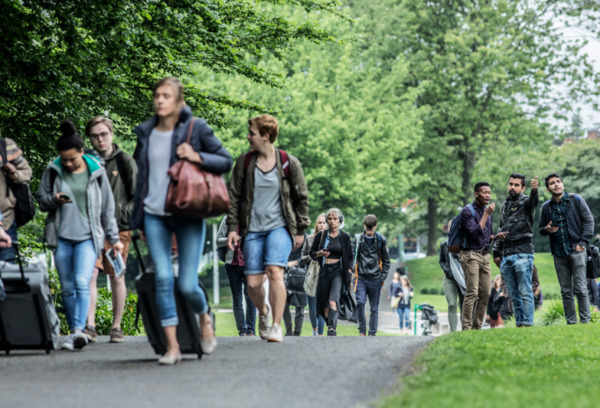